Most people would never approach a 1-Mile run by all-out sprinting the first lap. Most people know, instinctively, that they can’t sustain that pace. And yet, if you put those same people in a CrossFit gym and ask them to do “Kelly,” that’s exactly what they’ll do.

It’s no mystery how the rest of that workout goes. After those first two glorious minutes, we no longer feel like Mat Fraser. We don’t even feel like ourselves. Our 95# barbell feels like 135#. We’re breaking up the work into smaller and smaller sets, and taking longer and longer breaks. Every round is slower than the one before. Why does this hurt so bad?

Everyone has a lactate threshold (LT). It’s different for everybody—it depends on your level of fitness—but generally, it is between 75-85% of your maximum power. When exercising at or below this threshold, any lactate produced by the muscles is removed by the body without it building up. When you work out above it, lactate accumulates in the blood at a faster rate than it can be removed. As the unbuffered acid is added to the blood, you start to feel really bad. At this point, no amount of mental fortitude will save you. It’s biology. You have to slow down.

Understanding this helps us determine how to properly pace workouts to maximize both our scores in the near term and our fitness over the long term. For workouts longer than 7 minutes, it looks like this:

What most people do is the opposite. At 3,2,1, go, they come out hot because they’re fresh, they feel good, and they think that have to put a big dent in the workout up front because they’re going to be fatigued and slow later. So, they do round one as fast as they can, then do round two as fast as they can, and every round gets slower and slower to the point where they’re training at 40-50% of their max pace. This strategy becomes a self-fulfilling prophecy. It looks like this: 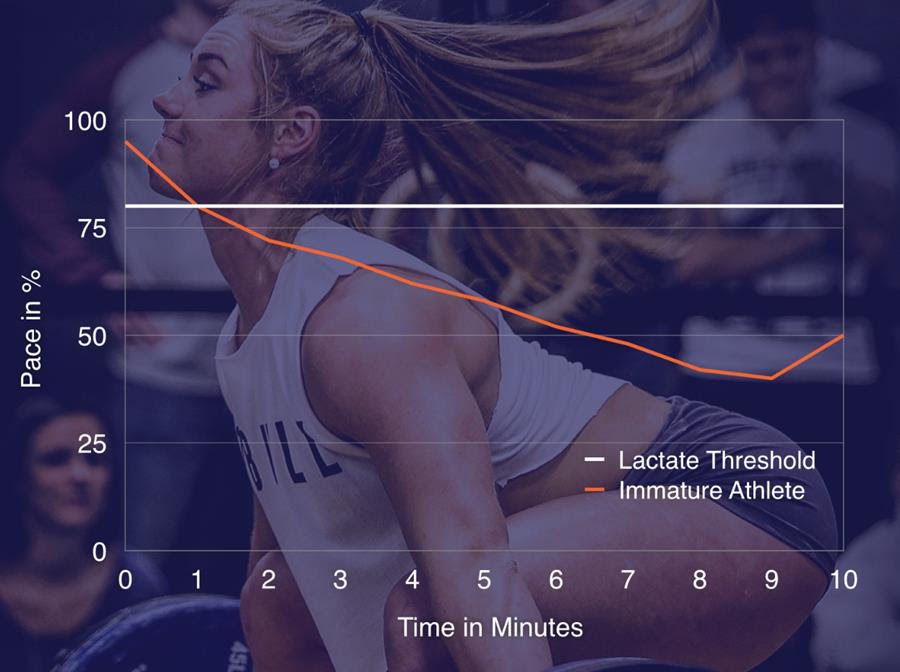 The area below each curve represents work. It’s easy to see that Athlete 1 got significantly more work done than Athlete 2. This is the magic—not only did Athlete 1 get a better score than Athlete 2, she got fitter.

The more time you spend at or around lactate threshold, the fitter you become. Athlete 2 spent only about three minutes at her LT. Athlete 1, by contrast, spent ten minutes there. Athlete 1 got three times the desired stimulus of the workout than Athlete 2 in that workout. Not a big deal in one isolated workout, but over time, the difference is significant. Because your LT represents your fitness, the goal is to always push it higher and higher. The only way to do that is to spend time more there. By training consistently at a threshold, Athlete 1 in the above example is increasing their fitness faster than Athlete 2.

Developing a sense of pace requires effort and practice. The next time you do an AMRAP or rounds-for-time workout longer than seven minutes, come out more conservatively for the first 2 minutes—aim for 80 percent of your max pace. From there, try and settle into a pace you can hold for the rest of the workout. Throughout the workout, ask yourself, “Can I go any faster without slowing down later?” If the answer is yes, kick it up a notch. If no, stay where you are or slow down. Use a buddy or a video camera to record your splits for each round to see how consistent you are. You’re not going to nail it the first time. But if you do this enough, you’ll start to gain a feel for where your threshold is.

It’s worth the effort. Training at threshold is a game changer.

You can go into the gym right now, no fitter than you were ten minutes ago, and PR your “Kelly” time simply because you were smarter. And if you train like that all the time, you’re going to get fitter at a much faster rate.

This is how the best in the world are training and competing, and nothing is stopping you from doing the same thing.